Engaging the public about X-ROTOR

Engaging the public about X-ROTOR 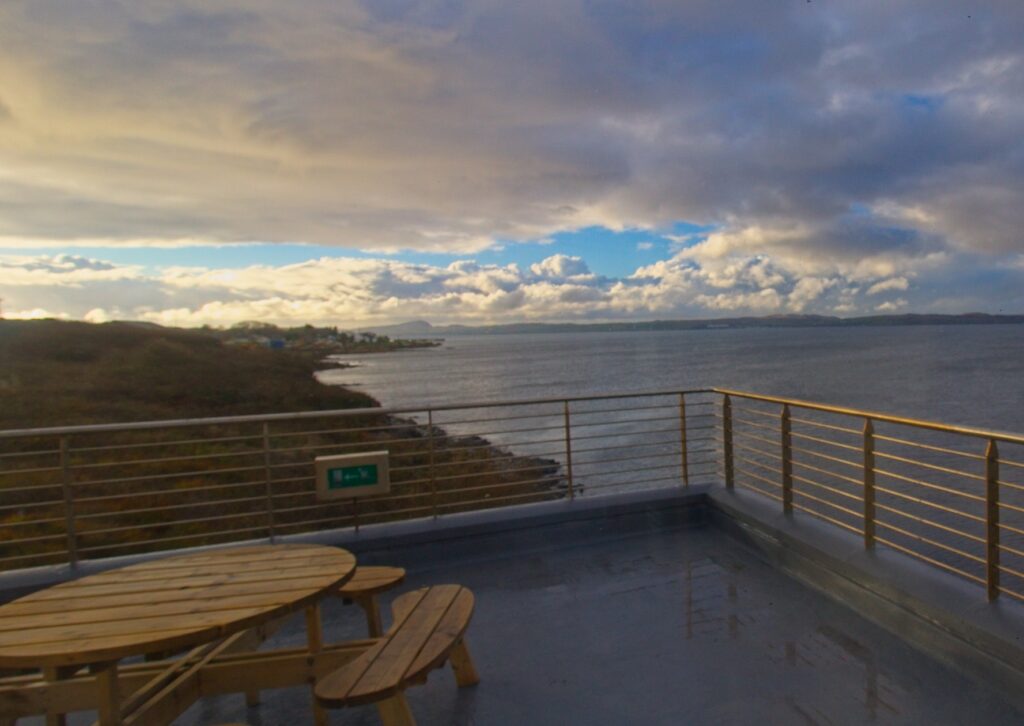 An X-ROTOR team (from UCC & UoS) held a public event at the picturesque Gaelic Centre (Ionad Chaluim Chille Ìle) on the Isle of Islay, Scotland on Wednesday, 16-Nov-2022.

Fifteen community members from all walks of life participated in this workshop, which aimed to capture thoughts and opinions of societal actors on wind turbines and wind turbine designs. Participants include local government officials, a couple of engineers, fishers, environmental activists, aquaculturists, local wildlife experts, and concerned citizens.

The participants were divided into three different focus groups where they discussed their impressions of climate change, what they thought of offshore wind farms in general and ended these sessions with the participants sharing stories of the sea that will help frame the kind of development they might find acceptable for their coastal community. Then we all reconvened to hear a presentation of the X-ROTOR concept itself.

The audience was genuinely captivated by the idea of this new turbine and the discussion surrounding it went on for about an hour. They picked up on its advantages right away and had some thoughtful questions for the designers to consider. There was even a BBC Alba (Scottish Gaelic Language news) reporter there who caught the presentation and also conducted a number of interviews [a link will be posed once it is broadcast].

So why Islay? There are two main reasons Islay was selected for the event. First, the island community is a microcosm for the challenges that face the world as it transitions to clean energy. The community is part of Scotland’s Zero Carbon Islands Initiative. Transitioning to zero emissions by 2040, the project’s goal, will be especially difficult for Islay as there is a huge industry there dedicated to distilling whisky. There are twelve distilleries on the island with two more under construction. This level of development has led to some tension – many residents are unhappy blaming the distilleries for buying up all the land, decreasing the availability of labour and stressing an already saturated housing market – not to mention its impact on the island’s carbon emissions.

The second reason we chose Islay is that it has an active community energy organisation, the Islay Energy Trust. This organisation has about 300 members and they own a wind turbine which sits in an active peat harvesting bog. This juxtaposition reveals the representative power of this community. You have this small fishing community dealing with the pollution of industry and yet trying to be an example of how society can change from being based upon ancient forms of energy to embracing clean energy and community empowerment. An inspiring location!

The X-ROTOR project has received funding from the European
Union’s Horizon 2020 Programme for Research and Innovation
under Grant Agreement No. 101007135.

The X-ROTOR project has received funding from the European
Union’s Horizon 2020 Programme for Research and Innovation
under Grant Agreement No. 101007135.

We use cookies on our website to give you the most relevant experience by remembering your preferences and repeat visits. By clicking “Accept All”, you consent to the use of ALL the cookies. However, you may visit "Cookie Settings" to provide a controlled consent.
Cookie Settings Accept All Reject All
Manage consent

This website uses cookies to improve your experience while you navigate through the website. Out of these, the cookies that are categorized as necessary are stored on your browser as they are essential for the working of basic functionalities of the website. We also use third-party cookies that help us analyze and understand how you use this website. These cookies will be stored in your browser only with your consent. You also have the option to opt-out of these cookies. But opting out of some of these cookies may affect your browsing experience.
Necessary Always Enabled
Necessary cookies are absolutely essential for the website to function properly. These cookies ensure basic functionalities and security features of the website, anonymously.
Functional
Functional cookies help to perform certain functionalities like sharing the content of the website on social media platforms, collect feedbacks, and other third-party features.
Performance
Performance cookies are used to understand and analyze the key performance indexes of the website which helps in delivering a better user experience for the visitors.
Analytics
Analytical cookies are used to understand how visitors interact with the website. These cookies help provide information on metrics the number of visitors, bounce rate, traffic source, etc.
Advertisement
Advertisement cookies are used to provide visitors with relevant ads and marketing campaigns. These cookies track visitors across websites and collect information to provide customized ads.
Others
Other uncategorized cookies are those that are being analyzed and have not been classified into a category as yet.
Save & Accept
Powered by